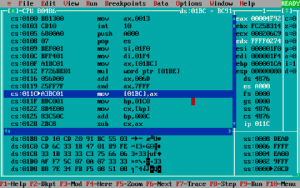 Was speaking with a chap at a networking meet-up just the other night who had applied for, and was reasonably confident that he would get, a design patent on what is colloquially known as a hamburger menu.

When I pointed out that these have been quite popular for a year or two, he chastised me by pointing out his design patent was filed for some four years prior to today’s date.

I thought for a moment and then mentioned that hamburger menus were also in Turbo Debugger, for DOS, somewhere around the early 1990’s but went back as early as the 1980’s on the Xerox Star.

The entrepreneur dismissed this out of hand, pointing out that his design patent was unique because, and I quote “It’s on a mobile phone.”

I've founded/co-founded six businesses as CEO and been hired as engineer #1/CTO at six others.

I am a cross-platform mobile developer

I am a broken project fixer

I am a trained chef

I was in a punk rock band

I used to race motorcycles

I am a furniture builder

I am a growth hacker

I was a journalist

I am a hardware hacker

I think too much

Over the years I have built digital and physical products that have become household names.

Everything from video games to medical devices.

If there is one thing I understand, it's building products, putting them in the hands of users, and building a business around that product.

Throughout my career I've raised large sums of money dollars for the start-ups I've worked with, and generated more than a billion dollars in measurable real-world value.

You can hire me on a consulting basis as either a fractional CTO or mobile developer by contacting my agent at 10x Management.